użytkownik usunął konto obserwuj 0
The tennis world has been shocked with Maria Sharapova decision to fire Jimmy Connors as her coach after just one match - a second round loss in Cincinnati last week.Now, according to Tennis.com, it seems that Sharapova did not even tell Connors herself that their partnership was over. The world no. 3 made her father Yuri do the honours of telling the tennis legend that his services were no longer required.It also seems that Sharapova's father was the one who was pushing for his daughter to work with Connors.The Russian has played only one match in the hardcourt season and goes into New York without match fitness on the hardcourts.
Oceń: Lubię Nie lubię Anuluj (0)
|

”I've just never done it in my career, so why start now?”

"It’s not the right fit for this time in my career" Sharapova said in a statement emailed to TENNIS.com.ESPN and the Times of London first reported the story.Sharapova split with her coach of two-and-a-half...

"It’s not the right fit for this time in my career" Sharapova said in a statement emailed to TENNIS.com.

ESPN and the Times of London first reported the story.

Sharapova split with her coach of two-and-a-half years, Thomas Hogstedt, after Wimbledon and then hired former No. 1 Connors, who coached Andy Roddick for about 18 months before resigning in 2008. Sharapova and her former coach Michael Joyce spent a day and a half working with Connors in December 2007, prior to her title run at the 2008 Australian Open.

Connors always fascinated Sharapova’s father, Yuri, who was still traveling and coaching his daughter at the time. Sources told TENNIS.com that it was Yuri who initiated the hire of Connors this time around.

Sharapova and Connors worked together in Los Angeles for a couple of weeks prior to the Cincinnati tournament. The four-time Grand Slam champion has been contending with a left hip injury she suffered at Wimbledon. The injury prompted her to pull out of scheduled tournaments at Stanford and Toronto.

Sharapova lost her opening-round match in Cincinnati to Sloane Stephens, and though she was offered a wild card into New Haven next week—she has only played three matches since losing to Serena Williams in the Roland Garros final in June—she declined and said she would rather train in Florida and not over-tax her body.

"I'm planning on playing a lot of matches in New York, and just for the body it's tough to play a week before if you're planning on doing extremely well in that event,” she said. ”I've just never done it in my career, so why start now?”

After her loss to Stephens, Sharapova offered her thoughts on having Connors in her corner.

“It's great to have his support. I'm enjoying being part of his experience and him, just the understanding of certain situations," she said. "He's been there, done that. It's just nice to have. But when you're out on the court, if it gets to 5-all or 6-all in the third set, you're worrying about you and your opponent and, to be honest, not so much what's around you or your coach or the crowd. You're so into the match. That's how I always hope to be, is when I go on the court, everything that I did, just have to go out and trust that and not really think about anything else.”

Sources also said that Sharapova made her father Yuri make the phone call to Connors to tell him that they will no longer be working together.

It is unclear whether Sharapova will try to hire a coach prior to the U.S. Open, which starts in 10 days, or work with an interim coach. She could ask one of her regular hitting partners, such as former Wimbledon semifinalist Vladimir Voltchkov, to assume that role.

The third-ranked Russian will likely work with her father this week while she’s in Florida, but he has not traveled with her since she underwent shoulder surgery in October of 2008, so it’s questionable as to whether he would want to coach her again at a tour event.

Some observers at the Cincinnati tournament believe that Sharapova may be having shoulder troubles again.

Another option might be to employ a coach from the Good to Great Tennis Academy, which is run by Swedes Magnus Norman and Mikael Tillstrom, who coaches Sharapova’s boyfriend, Grigor Dimitrov. 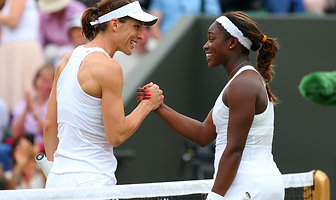