"So maybe I'm not the best person to speak about it but as a player I think I have my say. Oh and haters u can stop reading now because it's gonna be long.
I've been extremely SHOCKED by what I heard, saw or read since I arrived in Paris. Yes, you have Mladenovic. Does it mean you have to be unfair with the other players? Journalists, does that mean u have to write a story about her every day instead of just doing your job which is giving REAL INFORMATION? Does that mean you have to agree with everything she says? Does that mean u have to be DISRESPECTFUL towards her opponents or even the remaining players in the draw?”

“I watched the replay of the end of her today's match and this is literally a SHAME for tennis. French crowd doesn't care about the game, about players, about the beauty of sport. Admittedly, they are involved in their players' matches, but supporting someone DOES NOT MEAN being DISRESPECTFUL, UNSPORTSMANLIKE, RACIST, HURTFUL towards the opponent. Every player is a human being, has a heart and emotions and lives for tennis and NOBODY HAS THE RIGHT to destroy someone to tears. Wake up French crowd, stop being so HEARTLESS: this is not what sport is about.”
Vs Mladenovic

“Every decent player would be ashamed to have a crowd that behaves this way. Every good person wouldn't accept it. But what can u expect from someone who is constantly and publicly speaking badly about everyone for no reason, and whos ready to invent anything or to celebrate every error of her”opponents to win ?. That's not how champions behave. I actually don't have many friends out there but I truly hope that whoever wins this RG is someone who represents and conveys the true values of tennis. And I hope that anyone who feels concerned by this post will think about it and watch Garbiñe's post-match press conference”

Niby śmieszne, ale mi jakoś nie do śmiechu było po tym pytaniu (rany wciąż świeże): "Q. The last time you played at a slam obviously was the match against Simona at Roland Garros. How quickly were you...

Niby śmieszne, ale mi jakoś nie do śmiechu było po tym pytaniu (rany wciąż świeże):
"Q. The last time you played at a slam obviously was the match against Simona at Roland Garros. How quickly were you able to kind of move on from the disappointment of that? Did today's good win help maybe erase some disappointment, or are you not thinking about it at all?
ELINA SVITOLINA: No, I don't think about it. If I would all the time come back to that match, probably I would be in the crazy house now (smiling). That match, it was -- of course it was very disappointed. I was like one ball away from semifinal, from my biggest win, and yeah, I didn't do it". 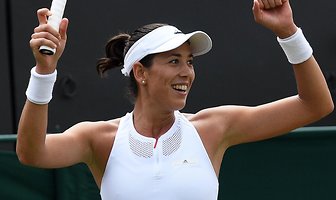